What Are the Benefits To Having A Green Roof? Learn More


This roof was a demonstration project done in cooperation with the NFTA and its facilities managers. The idea for this shelter originated with Mike Jackson, a sustainability consultant, who specializes in inspiring green projects.Green Top teamed with Eco_Logic Studios, Buffalo’s premier green architects, to design a lightweight yet robust green roof which inspire riders of the NFTA’s Metro Bus system. The site chosen for the bus shelter green roof is the busiest in the transit system and is situated outside of NFTA headquarters. We had to overcome several technical hurdles to ensure the roof performed to New York States stormwater control standards. In addition to that we had to design for the potential of high snow and wind loads.

Besides the intended performance benefits normally provided by green roofs, this project aims to bring attention to the NFTA’s transit system and increase ridership. Increased use of the transit system reduces pollution and makes smarter use of existing resources.

This shelter is  a little green jewel in downtown Buffalo, right at the corner of Ellicott and Division, and opposite the historic ECC City campus. 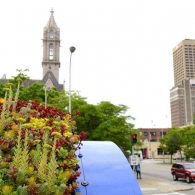 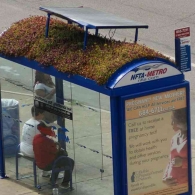 View all posts by david lanfear →